This Eggless Homemade Churros recipe will guide you in making one of the most achievable treats that you can easily make at home.

It also proves that not all bread-like munchies require the use of an oven. Sometimes, even the simplest method of cooking (like frying) would be enough.

You probably tried these yummy snacks once in your life. They are delicacies known to have originated from Spain and Mexico. Although it was not too clear how it became a widely known snack around the Philippines as well.

The signature cinnamon taste is what makes it a remarkable treat for most people. Then once you get a hint of the smell of cinnamon, you won’t be able to resist eating a few pieces. And the chocolate dip? Such an immaculate combination.

Wanna try making your own eggless homemade churros? Well, you’re reading the perfect article for that. Come and make some churros with me.

To make it easier to understand, I divided the ingredients into three parts: coating, churros, and chocolate sauce.

These are the ingredients for the dough:

All-purpose flour, the most basic flour used in baking and several dessert recipes. It can be easily found in local supermarkets. However, you may use vegan or gluten-free substitutes if you prefer them.

The white sugar will give a slight hint of sweetness to the snack. So you’ll be able to eat it even without the coating or dip.

Water will act as an agent to make the dough intact and well combined. Do not put less or more, or else it may ruin the recipe.

Salt is a well-known flavor enhancer. It will boost the overall flavor of the snack to make it even more delicious.

The vegetable oil will make the inside of each churro moist. Plus, we’ll be needing a lot of it for deep frying later on.

Ingredients for the coating:

Make it sweeter with the help of white sugar. If you want, you may also use powdered sugar. But I chose white sugar since it can be easily bought almost anywhere. And it is more common in making churros coating.

Of course, you can’t forget the delightful aroma and taste of ground cinnamon. This is what makes the “Mexican donuts” for what they are.

To make the chocolate dip:

Dark chocolate melts work better in terms of taste. They aren’t too sweet, considering that the treats have already been covered in sugar and cinnamon.

A little bit of heavy cream will help balance the chocolate even more. Also to give it an ounce of creaminess when it comes to consistency.

How to make eggless homemade churros

Put together the water, vegetable oil, white sugar, and salt in a pan. Mix using a spatula then let it boil for a few minutes.

Get a bowl and put the all-purpose flour. Combine the sugar water mixture then mix again using a spatula until the dough is formed.

Transfer the dough to a piping bag. Put aside for a while and make the coating by combining sugar and cinnamon in a Tupperware or container.

Prepare the pan by heating it up with cooking oil. Once at the right temperature, pipe down pieces of churros and use scissors to cut them. Deep fry until they turn golden brown in color.

Use a cooling rack to remove excess oil after frying.

While letting them drain, prepare the chocolate dip. Use a pan to mix the dark chocolate melts and heavy cream in low heat. Mix well.

Coat with the sugar and cinnamon coating by putting the churros with the coating and shaking the Tupperware. Serve with the dip to enjoy with family and friends.

Make ahead, storing and pro-tips

For make-ahead eggless homemade churros, you can prepare the dough in advance then have it refrigerated for a few days. This will give you an available snack to cook anytime. Put it in the freezer for longer shelf life.

At the same time, you may have them fried for a while before refrigerating or freezing them. Just fully deep fry once it’s time to eat them.

Another way to enjoy eggless homemade churros? Try drizzling the chocolate instead of using it as a dip. Then add more texture by topping with ground nuts. 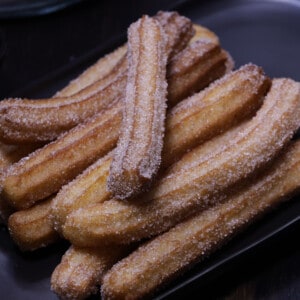