Cloud Bread Bun is not only soft and fluffy. It also boasts an amazing nutritional profile because of its ingredients. The fluffiness may just be an addition to how great this simple recipe is.

Based on its name, it is comparable to a cloud. Who knows, this might be what you need to make your healthy sandwich healthier and more exciting

I’m sure most of you are familiar with the fluffy souffle pancakes. Many people prefer them over regular pancakes. Because for them, the softness is just so fun and even addictive. Similarly, this recipe is just like that.

Be prepared as there may be a chance that this will be your new favorite bread. Now, let’s go and have fun cooking it in the kitchen.

This may be one of the few recipes that only requires less than five ingredients. Sometimes it can be surprising what limited ingredients can do. Here is what we’ll be needing for this recipe:

The eggs will serve as the base and main ingredient. The egg whites especially will be responsible for the fluffy and soft texture of the bread.

If you are not familiar with the cream of tartar, it is used a lot in baking. Since we will be making a meringue out of the egg whites first, we will be needing it. It will work as a stabilizer so the meringue will become firm and compact.

And the secret ingredient - Greek yogurt. Not only will it be a good source of nutrients, but it also works well with baked goods. It has the same job as what butter does - making the baked goods incredibly moist.

In two bowls, separate the egg whites from the yolks. Add the cream of tartar to the bowl of egg whites. Use a hand mixer to beat until you see soft peaks form. Set aside for a while.

Drop a dollop of Greek yogurt into the bowl of egg yolk. Mix well together using a whisk or fork. Combine the meringue slowly to the egg yolk mixture. Mix everything together by folding.

Place a parchment paper the same size as your baking tray. Use a scoop to transfer the batter to the tray. Make as much while taking note of their distance from each other. Flatten the top of the ready-to-bake batter using a spatula. Bake in the oven at 150C for 25-30 minutes, or until they turn golden brown.

Is there a make-ahead for cloud bread bun? Plus storage tips

Sometimes we tend to make more than what we need. Or it may also be intentional, making more so we can have something ready to eat for the next day. This is what we call to make ahead food, a dish that you cook today but can consume for the next few days.

For the cloud bread bun, it is pretty simple. They can be stored in the fridge once they become soft and cooled enough. The bread can last for three more days. Reheating them is also pretty simple. A toaster is enough to do the job.

Cloud bread bun is easy to make. But there are things that must be considered beyond the simple process of cooking it.

First, you must strictly separate the egg yolks from the whites. Even a single speck of yolk can ruin it.

Second, whipping the egg whites is a delicate process. You should never do it too much or too little. Plus, make sure to use an oil-free and clean whip or hand mixer.

Third, ingredients must be at room temperature before conducting the cooking process. 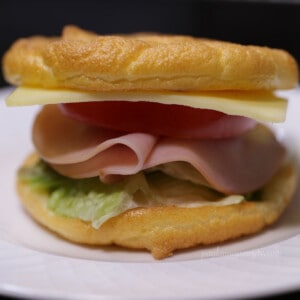