Puto Recipe Nowadays, people are finding it too ordinary and simple. There are some cooks who add cheese or itlog na pula (salted egg) as a topping to make it more special, but Filipinos still feel it’s not enough to make this dessert stand out in a country where kakanins rule.

Many have tried to make Puto more exciting before, like experimenting with its shape, color, texture, and flavors, however, none of them succeed. Fortunately, someone thought that it’s now time to level up this traditional rice cake, and as a result, Leche Puto was born.

Leche Puto, also called as Puto Flan, is made up of the traditional Puto and Leche Flan, which is the Filipino-style crème caramel. The combination of these two all-time favorite Filipino dessert became a hit, since the sweet and creamy Leche Flan elevated the ordinary-looking steamed rice cake. This dessert is probably the first variety of this kakanin that can be considered restaurant quality.

The funny story is, Leche Puto was only invented after someone thought that it was such a waste to throw a lot of egg yolks after only getting the whites for his or her Puto recipe.

He or she came up with the brilliant idea to make Leche Flan out of the excess egg yolks, and combine it with the kakanin. That person ended up introducing the new dessert on the market and it became one of the most sought “pasalubong,” or souvenirs, from the Quezon Province.

Well we should be talking more about Puto Recipe here but it seems we mention too much about Puto Flan here, any way if you haven't tried that you better do just search on this blog and you will find it, it is the best on the internet and has gone viral for some reason. 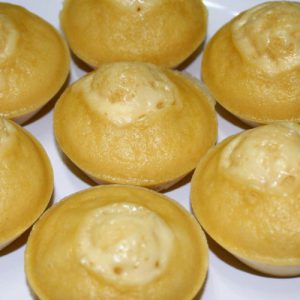