Quezon Tikoy can be considered as the local Filipino version of the sticky Chinese treat that is usually abundant during Chinese New Year. The Philippines has been greatly influenced by the Chinese, especially in terms of its cuisine and culinary techniques.

Originally called nian gao, the delicacy is often given away to friends during the Lunar New Year. It symbolizes the closeness and stick-to-each-other mentality that each family member must-have. Filipinos love them too, and they can make a snack out of it just by dipping them in beaten eggs and deep-frying afterward. Both children and adults love eating them when the month hits around January or February in the country.

In the southern part of Luzon is a province known to make the local version of tikoy - the province of Quezon. Actually, the place is already rich in different kinds of local delicacies. But their very own tikoy has become their pride and one of the most famous pasalubongs bought by tourists. It is usually wrapped in Anahaw leaves.

There are several municipalities that are said to be the big players in the production of the sticky rice cake: Gumaca, Macalelon, and Sariaya. There are also festivals held that are specifically designed to celebrate the discovery and abundance of the sweet, and they are usually done in Macalelon, Quezon.

Carbohydrates are not always bad, but they must be eaten in moderation. The delicacy contains high amounts of carbohydrates, which is an essential macronutrient for the body since it is a source of energy. But again, it may be bad to eat too much of it, so be sure to know how much is enough.

How to make Quezon Tikoy

Mix it well until combined then transfer in a pan (I used a 9-inch round pan). Place it in a steamer and steam for 45 minutes.

Once done, remove from the steamer and allow to cool down. Slice it accordingly and serve.

Almost similar to the appearance of kutsinta, Quezon Tikoy is made to have a dark shade of brown. It is super soft and very sticky too.

You may struggle from slicing it, but it will all be worth it. It is a great snack that can be paired with a hot cup of coffee or tea. 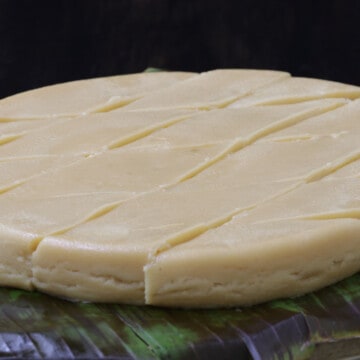