Ube Kalamay is another way for Filipinos to enjoy ube, which is a local version of purple yam.

The dessert is famous all around the Philippines. It has long been proud of its long list of traditional treats, especially it's very own kakanin. There are several varieties of Filipino rice cakes. They are all scattered around the country. Lots of them are found on the island of Luzon, but there are also Visayan provinces that have their own and original versions of the sweets.

It is said that the treat originated somewhere in the Visayas. Given that the name kalamay is derived from a Visayan word that translates to sugar. The rice cake has been with the Filipinos even as the Spanish colonized the country. It is still existing and well-appreciated as a pasalubong until now.

The main ingredients of the sweet are glutinous rice, ube, sugar, and coconut milk. Each of them contributes to the health benefits of the dessert as a whole. Coconut milk promotes good heart health, ube, on the other hand, is very nutritious and is rich in antioxidants.

The root crop is mixed together with glutinous rice to make it into the originally sticky dessert known as kalamay. The taste of the purple yam blends perfectly with the sticky rice and sugar. The combination is as good as a meal as it is a snack. It’s commonly sold in markets and by some street vendors. It is often sold together with traditional Pinoy meriendas like lugaw, palabok, and the like.

How to Make Ube Kalamay

Filipinos love eating ube kalamay as a sweet course after the main meal, but it can also be eaten as a snack in the morning or afternoon. The sweet is soft and sticky, and the color purple that it gives off is enough to make anyone's mouth water. It is often topped with coconut latik, which blends well with its sweetness. The dessert tastes even better when paired with hot tea or chocolate. 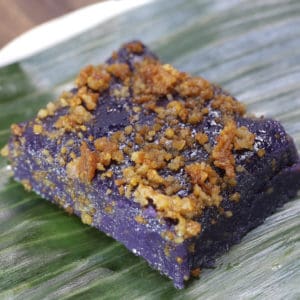