Pinwheel Sandwich is a fun and creative way to enjoy sandwiches. If your kids had enough of the same old bread, why not give them something more exciting?

The recipe does not require complicated cooking methods. Actually, you can even invite your kids to prepare the treats with you. The recipe becomes child-friendly as long as we give the children proper supervision.

To make it appeal to children and adults alike, we will use ham and cheese and peanut butter banana for the spread. They will surely like the contrasting sweet/salty and savory flavors when they eat them. We can encourage the kids to eat healthy foods more with the help of these flavors.

It does not come as a surprise that no earliest known record of the recipe exists in the Philippines. Because the dish originated from England as early as the 10th century. The English enjoyed it as a snack that they pair together with a hot cup of tea. History says that the pinwheel was likened to another pastry called canape (from France). Since the discovery, cookbooks adapted the recipe in the year 1900s.

The modern versions became more vibrant and exciting than the first ones. During its discovery, people simply used butter or cream cheese as a filling for bread. The food improved along with the new sandwich spreads introduced to the market.

When we make ham and cheese for the sandwich, we will benefit from its protein content and several other nutrients. For peanut butter banana, they provide great amounts of magnesium and potassium. Overall, the flavors that we will use for the recipe are both healthy and delicious.

And if you want to advance the healthiness of your dish, you can use healthier varieties of bread.

Snack time does not have to be extravagant. Sometimes, a little more effort and experimentation can go a long way. Like instead of making plain sandwiches for the kids, how about some pinwheel sandwich? It may even boost their appetite when they get attracted to the food's visuals 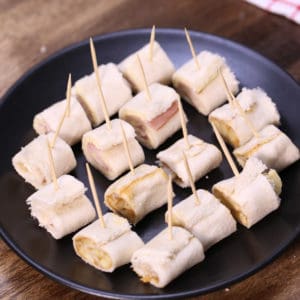