Hopia Recipe is an exciting way to make your own Filipino-Chinese delicacy readily available at home. You can even choose which flavor you prefer, or maybe you can try experimenting with new flavors too.

Not all Pinoys like eating this mini cake. But it is safe to say that more than half of the population has completely fallen in love with it. Some may even say that they are not a fan of it. However, try giving them a piece and they will surely take it to eat immediately. It has this strange, but in a good way, characteristics that make it look delectable and inviting to the majority of Filipinos.

Hopia is like the smaller and simpler version of mooncakes. More people fancy it compared to the latter because it doesn't taste too complex. When translated from the Hokkien language, it describes the delicacy as a good pastry. It is also noticeable from its name where it originated from - China. Whose immigrants brought it to the Philippines when they traveled to the country during the early 2000s. Until then, it became a favorite of many Filipinos. This may also have been caused by the high influence of Chinese culture and food in the country.

There are various flavors for hopia. But there are only three kinds that are currently more well-known - monggo, ube, and baboy. Depending on the flavor of the pastry, they will be able to give different health benefits. The ingredients usually contain several nutrients. Especially those that are flavored with monggo and ube, which can be considered healthier.

How about trying the Hopia Recipe to make the delicacy as snacks for your friends? They will surely love the flaky and soft bread part; and the creamy and soft filling inside it. Pair it with fancy drinks like coffee or tea and you already have the perfect afternoon snack. You can also eat it after a meal, really, you can eat it anytime you like! 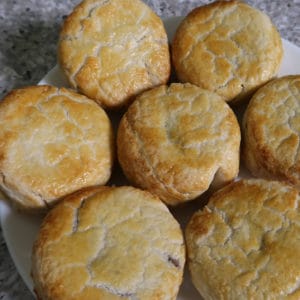 To Make The Red Bean Paste

To Make the Dough