Ensaladang Labanos is a Filipino’s way of enjoying a root vegetable that is habitually looked down upon because of its lack of use for most recipes.

This vegetable - which is radish in English - is often used as an extra ingredient for foods like sinigang. But this time, the labanos or radish is the star of the recipe. This food can either be eaten as a side dish or as a viand that Filipinos eat with rice.

Ensalada is a method of cooking in the Philippines that is similar to the Peruvian ceviche which involves the use of an acid (such as vinegar) as a marinade. When it was first done by the Filipinos, they made use of ingredients like pork and fish, and it is said that the Visayans were the first ones to do it.

As time goes by, they were able to try and innovate the dish by using vegetables too. Since then, the vegetables that are cooked in the said method made an impression on the public. They are also a lot cheaper when sold in carinderias so you can choose it as your meal if you want to save money.

Tips How to Make Ensaladang Labanos

Radishes are amazing healthy vegetables. Although they are ignored by many people because of their unusual smell and taste. They are packed with vitamins A, C, and E and many other minerals. The best benefit that it can provide the body is its ability to help in boosting the immune system. You can also eat labanos if you have low levels of potassium since it is rich in the said mineral.

Ensaladang labanos is not for everyone. It has a strong taste that some people may not like. But it will get better when you get used to it, it tastes unique and deliciously healthy at the same time. 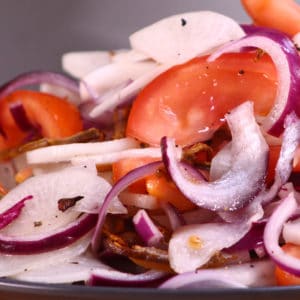