Graham de Leche is currently the apple of the eye of Filipinos when it comes to another innovative dessert.

If you are tired of the same old leche flan and graham float desserts, maybe it’s time for you to try this new trendy dessert.

It wasn’t long before this new delicacy became the talk of the town. I was saw people in Facebook people posting about that like leche flan surrounded with lots of creams.

I really got curious, and as I continued to scroll down they were even more of them talking about it! Even the food groups I joined recently were filled with posts regarding this delicious new discovery. Lots of people were showing their own creations and started to sell them online.

That’s when I thought about the possibility that anyone can make their own homemade version of the delicacy, and as it led me to minor research I was able to realize that it is actually possible.

The flan used for the recipe is a traditional Filipino dessert, it is more known as creme caramel in other countries like Spain and France which also makes their own versions of it.

The use of graham for desserts is a modernized discovery of Filipinos which made them able to make no-bake cakes, they are called refrigerator cake or mango floats in the Philippines.

Graham De Leche is totally irresistible that if I were to choose which dessert I can eat today, I’ll definitely pick it. The sweetness and softness of the plan, the surrounding cream giving it an oomph of creaminess; and the graham layer is such perfect combinations! 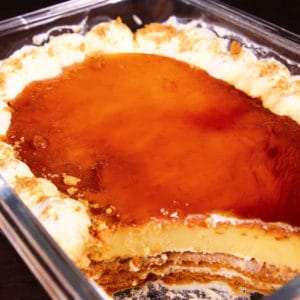 To make the Leche Flan

To Whip The Cream

To Assemble the Graham De Leche