Buchi Recipe since the Chinese brought Jian dui, or locally known as Buchi, in the Philippines, it has become a popular dessert in the country.

Filipinos almost love everything that is deep-fried, and this Chinese delicacy is one tasty deep-fried snack.

These sesame seed balls were said to have originated way back to the Tang dynasty, and jian dui was said to be a popular food in Central China. Jian dui later become a part of the southern Chinese cuisine after people from Central China migrated to the southern region, and took their food with them.

When the Chinese settled in the Philippines, they integrated Cantonese and Fujian cuisine to Filipino cuisine. Buchi was one of the most popular delicacies they inherit to the Filipinos. These days, Filipino-Chinese gatherings would not be complete without serving Buchi on the table.

The balls are then filled with lotus paste inside, but sometimes black bean paste (hei dousha) or red bean paste (hong dousha) is used as alternative fillings to the pastry.

There is also a local version of Buchi where it is filled with purple yam paste (ube jam).

Tips How to Make Buchi

Buchi Recipe may seem like a complicated dish to make. The whole process involves mixing, rolling, frying and filling. It may not be an original Pinoy dish, but Filipinos just love these balls nonetheless.

I forgot to mention that the Koreans have their own version as well. I saw on youtube or from a television commercial. The process of making is relatively the same whether it's from China, South Korea or Japan. 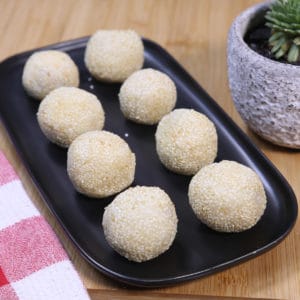