Paella Filipino Style is a dish that almost everyone all around the world is familiar with.

It is similar to the Italian risotto which is also a rice dish that contains other savory ingredients.

Even though such food is abundant in many European countries, it has also influenced an Asian country like the Philippines and it led to people making their own version of rice dish.

There is a Filipino food called Arroz Valenciana, and it sure looks and tastes similar to paella. But there are still differences between the two, and Pinoys are able to distinguish them as they cook and describe both of them separately.

I know we are all aware that paella is a Spanish meal, but how did it become a part of Filipino cuisine? Originally, the rice meal was discovered as a regional delicacy from Valencia, Spain. As a country that colonized the Philippines for over 300 years, Spain was able to influence the country in a lot of ways, including cuisine.

There are many ways to cook the dish, and each of their health benefits varies. The most common types are the Valenciana and seafood, which are what Filipinos cook most of the time.

However, there is also a supposedly healthier variation which includes vegetables. In conclusion, all of the types are filled with nutrients, it will just depend on the ingredients used.

No matter the occasion, Paella Filipino Style is a perfect choice for a big celebratory gathering. Your friends and family will surely love the combination of flavors and soft texture. So how about cooking the recipe this coming holiday? It’s time to showcase your cooking skills too! 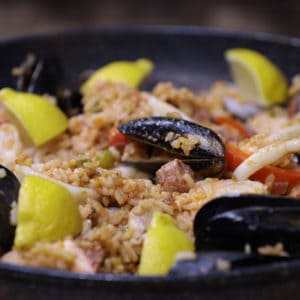