This Biko Recipe was my Mom's original but my husband who is from the northern part of the Philippines has their own way of cooking it.

Having traveled in most Southeast Asian countries, my husband and I have seen difference and similarities in the food and culture, in this case we will look at food.

Rice cakes are almost the same but they seem to be cook differently, no wonder we saw some variants of this rice cake in Thailan.

The difference is the color as Thai's use sugar and coconut milk only while the panocha or gula malacca is used in the Philippines as well as Malaysia.

How to Cook Biko Recipe

It is pretty straight forward to cook this all you need is a glutinous rice, coconut milk and sweetener which can be sugar or the panocha.

The secret in cooking it is in a low fire and continuously stirring to avoid the cake from burning and for it to be evenly cooked.

A common mistake for people cooking it is that they tend to set the stove in high heat which burns the bottom quickly.

Additional coconut milk or cream makes it even taste better, I recall my grand mother cooking it for us while at the farm and sometime we help by stirring.

If you have an access to a fresh coconut and a coconut grater then go for it but the one's canned from the supermarket is not bad as well.

Squeezing that coconut and doing it from scratch is so satisfying, make sure to add a warm water on the grated coconut and separate the first and second extract.

Well I hope you get to make this delicious Biko Recipe and get to share it with someone you love!

If you have any questions, suggestions or anything in mind do not hesitate to leave a comment or send us a message. 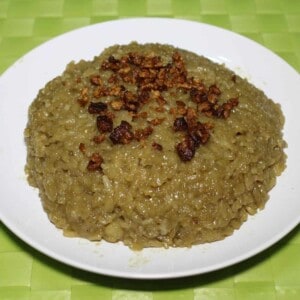 Jenalyn Rose Forbes
Biko is made of glutinous rice, coconut milk and sugar or my husband use panotsa/pulot a concentrated product of cane juice that makes biko sweet in their province and coconut crumb toppings or what we locally call latik. It is usually prepared during special occasions in cities and provinces, but it is more popular in provinces.
No ratings yet
Print Recipe Pin Recipe
Prep Time 5 mins
Cook Time 35 mins
Total Time 40 mins
Course Snack
Cuisine Filipino
Servings 5
Calories 1291 kcal