Ube Palitaw sa Latik is probably the traditional Filipino dessert that you are looking for if you want to eat something more than your plain old palitaw.

If you compare it to the usual flat rice cakes that Filipinos were known to snack on during their afternoon off, this recipe is considerably more delectable thanks to the addition of latik and all the other flavors included in the recipe. What are you waiting for? Let’s go and get to know more about the delicious delicacy and try making some!

Most Filipinos are probably familiar with the small, flat and oval-shaped rice cakes that can be bought in markets and from hardworking vendors who sell them together with other kakanins.

It is often covered in dried coconut and sugar, so once they are bought, they can immediately be devoured. For the discovery of this yummy Pinoy delicacy, we have the people of Pangasinan to thank. They were the ones who first discovered the small round kakanin, and it was trial and error to develop the other possible ways to enjoy it; like this recipe.

Again, this variation is a lot sweeter than the plain palitaw. Instead of being simply covered by sugar, dried coconut, and sesame seeds; the rice cake is set on a sweet coconut milk-based sauce. Plus, the kakanin itself is flavored in ube! Just thinking about the combination already makes me crave for it.

Filipino sweets are made from fresh and authentic local ingredients. Ube palitaw sa latik will surely satisfy both the body in terms of health benefits and the tastebuds because of its deliciousness.

It can be enjoyed as a dessert which is eaten after a meal, or it can be devoured as a sweet snack during the morning or afternoon break time. Already craving? Go on and grab all your ingredients so you can make one for yourself today. 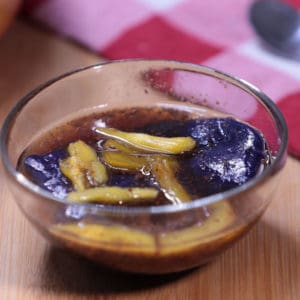