Pork Siomai knows its place in Filipino cuisine. Although completely foreign, Pinoys embraced the dish immediately the moment it reached the country’s shores.

Most of the time, many Filipinos consider it as a budget meal. They often buy it for their lunch to pair with a serving of rice. It costs a lot less compared to other lunch meals. For other people, they think of siomai as a leisure food that they enjoy as a snack during the afternoons. It can be clearly seen how it became a part of many Filipinos’ lives. And that’s where knowing how to make it becomes handy.

Some of you may think of siomai as very convenient food. Because usually, it can be bought from almost anywhere, even from street food vendors. But did you know that they do not contain the same ingredients? Or should I say, we don’t actually know if the ingredients used are healthy or not. The solution? Make them at home instead.

Before anything else, I will say a few words of encouragement. Since many Filipinos probably never tried making this, they tend to think of it as a hard recipe to do. Who wouldn’t be intimated though? But once you start doing the first few steps, I know you’ll immediately get the hang on things. So grab on that bowl and let’s start cooking!

Tips How to Cook Pork Siomai

Pork siomai will be more enjoyable to eat if there are toyomansi and chili garlic sauce on the side. I’m sure your kids will love this recipe too, as it is completely tried and tested. 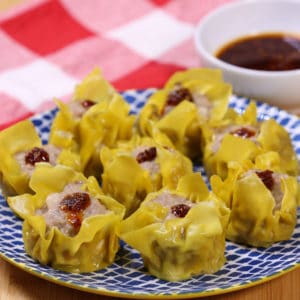