Pata Tim is an occasional dish. It is not a recipe that a typical Filipino will serve on a regular basis. Still, it has become a nationwide favorite because of its savory and sweet taste. Who could’ve thought that its combination of flavors will become a charming point?

A lot of foods from different countries greatly influenced Filipino cuisine. The use of soy sauce for the recipe is an influence of most Chinese food. People then consider the dish as a fusion of Filipino and Chinese roots. Just try going to Chinese restaurants in the Philippines and you’ll see their menus plastered with the name of the dish.

It’s all about the taste, not the health benefits

Unfortunately, if you want a healthy meal, then this recipe is not ideal for you. Filipinos cook it occasionally and it is served during special occasions only. But it does not mean that it is unhealthy, it can only turn into that if it is eaten improperly. The pata part of the pork is fatty, but it also contains nutrients that can help the body in many ways. Just don’t eat it too much to be safe.

It is fun to eat food like Pata Tim on a normal day. For example, eating it together with the whole family for Sunday lunch.

What is Pata Tim?

Pata Tim is a braised pork leg or pork knuckle. This cut of meat is relatively cheap and has a lot of connecting tissues, which melts and add flavor to the sauce. Pata Tim is known for its sweet soy tangy flavor made of soy sauce, onion, brown sugar, star anise, peppercorn, chorizo de bilbao, mushrooms, boiled eggs and pechay or baby bok choy.

When it comes to preparing the dish, it is not as hard as it sounds. Surely, it will take a few moments of your time to be able to cook it, but the process itself can be easily followed. It involves slow-cooking, which results in very soft and tender pork meat.

As a busy mom, I prefer to use a pressure cooker for this dish. I just put all the ingredients (except for chorizo, mushrooms, eggs and baby bok choy) in the pressure cooker and cooked it for 30-35 minutes. Just be cautious, make sure you wait at least 10 minutes before you open the lid to release the pressure. I added the remaining ingredients and simmer it for another 3-5 minutes.

Since it is slow-cooked, the softness of its meat is one of a kind. And by pairing it with a serving of rice will make it even better. Just imagining how the tangy sauce would taste when eaten with rice already makes my mouth water! 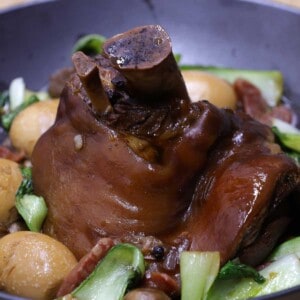