No-Bake Chocolate Fudge Brownies would taste the best when eaten together with a cup of tea.

Usually, it is made to have a moderate amount of sweetness. So instead of not wanting to eat more because of too much sweetness, the opposite happens.

Many people claim that this treat is absolutely addicting. One person can eat a serving for several people in one seating - no exaggerations added there. Actually, since many Filipinos have shown their interest in the dessert, restaurants and fast-food chains started adding it to their menus.

To give it a touch of something local, Filipinos started adding local ingredients to the recipe. For example, the casuy nuts are made into toppings. Or even several experimental ingredients - like Pinoy chocolate candies called Flat Tops - were also used by many adventurous Filipinos.

These chewy and chocolatey goodies have been existing for quite a few years already. Similar to many other desserts, it has originated from a humble home somewhere in America. In the past, people prepare and obtain ingredients for the recipe manually. But as the years advance, there are now ready-to-cook mixtures that can be easily bought in markets. We simply add water or milk to the powder mixture and we can bake them right away!

However, things are different in the Philippines. Filipinos took the initiative to make their own version of the treat. From selling them as pasalubongs to selling them in restaurants, it is no doubt that it has taken over the hearts of the Pinoys.

If you expect to get healthy from eating brownies, you may get disappointed. Sure, it can provide us with nutrients; but they are not enough for our diet. Unless the recipe includes healthy ingredients (like some kinds of nuts), we can’t expect too much from the dessert.

Nonetheless, it is not a bad food to eat. So it’s time to start making a few servings for yourself!

Who wouldn’t want some no-bake chocolate fudge brownies? It is one of the best chocolate desserts that we can serve our family and friends. You can serve it as a snack or as a dessert, and you can pair it with some delicious drink like a hot cup of coffee or tea. 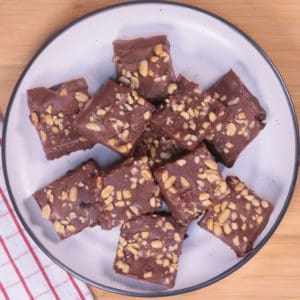