Maja Blanca Recipe this yummy dessert is thick and creamy, but with a gelatin-like consistency. It is sometimes topped with grated cheese, although there are some who also use roasted coconut shavings as an alternative.

In the Philippines, there are dishes that are expected to be served in the “Noche Buena,” or the Christmas Eve’s dinner. Besides ham and queso de bola (Edam cheese), it is customary to have a pasta dish, which is either Filipino Spaghetti or Creamy Carbonara, a large bowl of rice, and an “ulam,” or the main entrée.

It is also important to serve a dessert after this holiday dinner, and a great way to end the night is having a plate of Maja Blanca, which is a delicious Filipino dessert.

It may be a surprise to some people, but the original recipe for this dessert doesn’t include corn. The coconut pudding that is commonly served now includes corn kernels, since many people love the extra crunch and flavor it brings.

There are varieties of Maja Blanca that have emerged since many have tried to experiment with other ingredients to see what else will taste good with coconut milk. Squash and ube (purple yam) are the other popular Maja Blanca ingredients, and both taste just as good as the corn version.

There are also some who modified the recipe and added butter since it gives a yellow hue to this dessert which is normally white.

This Maja Blanca Recipe is so popular it has so far gone viral in the past two years, very simple to make and the ingredients are very easy to find, just go out and you will find a them in the neighborhood Sari Sari store.

The toppings can either be latik or cheese and if you want to re-invent the wheel you can put anything you want to satisfy your craving. 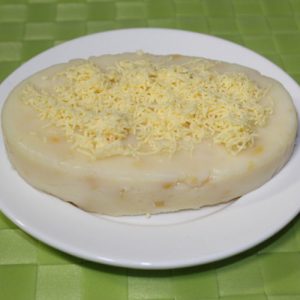