Kalamay sa Latik is a famous local delicacy in Nueva Ecija. It is made of sticky rice cake with sweet syrup, ripe jackfruit and latik.

For those who are not familiar, they would think that it is not related to Filipino rice cakes. But this unique delicacy is actually made from glutinous rice too, so don’t get fooled.

Normally, we can easily identify a sweet if it is a rice cake. Just like suman, puto, bibingka, biko, and pichi pichi; they are all made in solid form. We add them with toppings or dipped in sugar and sweetened coconut for more taste of sweetness.

This variation of kalamay, on the other hand, is literally swimming on a pool of sweet syrup. Thus, it is not as dry as the other of its kind.

All over the Philippines, provinces and cities have their own original delicacies. Even kalamay itself already has different variations by each area in the Philippines. So it is hard to say where it specifically originated.

Kalamay and latik are two different Filipino sweets, but it was the experimental and playful Filipino mind that was able to combine the two.

So far, the combination was a success, and it led to the cooking and selling of the newly discovered delicacy.

Fortunately, our bodies can benefit from the dessert when it comes to health. Most of the ingredients used for the recipe contains nutrients. But as a sweet, that amount is already acceptable. Just be sure to eat enough healthy foods so you can allow yourself to enjoy desserts.

Sweetness and chewiness combined - kalamay sa latik is the perfect dessert to pair a cup of tea. Or if you want, since it is a rice cake, you can also eat it as your morning or afternoon snack. This recipe is sure to make you taste an authentic Filipino delicacy. 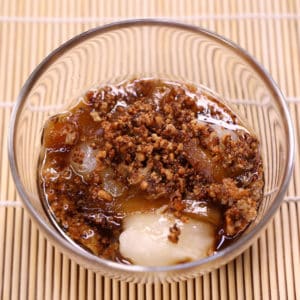 To Make the Latik

To Make the Syrup