Humok means “tender” which perfectly described the meat itself that is intentionally tendered to its best. Whatever the etymology is, Humba is something everyone should try.

This dish is basically a rather sweeter version of our typical Adobo. Humba tastes sweeter because of the sugar added to it.

In some provinces, they create their own twist to the dish. Some would add pineapple juice and slices to it, or some would put banana to blend in the natural sweetness of the pineapple.

Through this dish’s form of cooking, it tends to keep the meat last longer for several days without spoiling. It is also highly recommended to eat this dish when it has passed several days because it is said to taste better the longer it is stored.

When we were living in Singapore, we have many Bisaya friends and they thought me how to make this delicious dish. At first I thought, it's just another version of adobo but surprisingly there are other ingredients that I never thought I could include in this recipe.

First, I pan-fried the pork belly without any oil. I cooked it until golden brown and the fat is rendered. I removed the pork from the pan and set it aside. Next, I sautéd the onion and garlic then I added the peppercorn, bay leaves, soy sauce, vinegar, pineapple juice and brown sugar. I had to simmer it for 15-20 minutes until the meat is tender. Finally, I put the dried banana blossom and black beans, cook it for another 5 minutes until the sauce thickens.

Tips How to Cook Humba Recipe 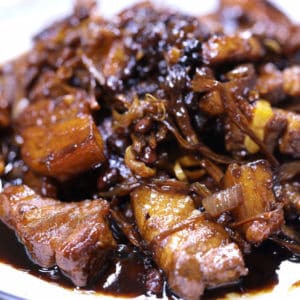