The ingredients are readily available in local groceries and supermarkets, so it doesn’t take a lot of effort to create a batch of Graham Balls.

The treats are simply made from rolling the mixture of crushed Graham crackers and milk into balls, and then sprinkled with candies or chocolate shavings.

There are some versions of Graham Balls recipes that use full cream, instead of milk. There are also some people who prefer using honey, instead of powdered sugar. These balls are similar to Munchkins, but Graham Balls do not require any frying or baking.

Graham crackers go way back in the late 1820s in New Jersey, and was originally meant to be part of a healthy eating diet called the Graham Diet. Today, these crackers are no longer considered healthy since they are now mixed with refined sugar and chocolate flavoring.

However, even if the commercial crackers today are no longer as healthy as the original version before, Graham crackers are still a popular snack among American children, and a favorite ingredient in making desserts like S’mores and Graham Balls.

Despite being a late bloomer in the Filipino dessert scene, Graham Balls Recipe are now a must-have at any children’s party in the Philippines. 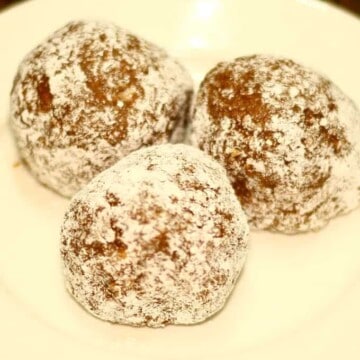 Jenalyn Rose Forbes
Graham Balls are desserts that Filipinos have come to love just recently. The concept of making desserts out of Graham crackers was not popular in the Philippines until early 2000s, but its popularity boom soon after.
No ratings yet
Print Recipe Pin Recipe
Prep Time 15 mins
Total Time 15 mins
Course Appetizer
Cuisine Filipino
Servings 10
Calories 302 kcal