Cream Cheese Flan proves to be the dream dessert. Imagine having to taste both cheesecake and leche flan in a single serving? All I can say is - yum!

Most Filipinos have a sweet tooth. Along with many traditional Filipino sweets, we are also fans of foreign desserts. For example, cheesecake.

There was even a time when Pinoys went crazy for this treat. When it became the talk of the town, several dessert shops opened to sell it as their main product. Cafes, at the same time, started to serve it more until it became a regular in their menu. Also, all these recipes on the internet make the sweet more accessible now. Cheesecake lovers have been rejoicing ever since.

How about leche flan? Sure, everyone knows that it is one of the best desserts that we can make at home. My family loves to eat it after our meals. Its sweetness makes any day a lot better. That’s why it is considered by many as their comfort food.

Honestly, I never thought that it would be possible for both sweets to be made into one. I just happened to browse the internet when I saw this recipe. Then I decided to give it a try while putting a little bit of my own twist.

The result was very interesting. It was a lot creamier and more solid than the usual flan.

Try this cream cheese flan recipe for your next family gathering. I’m sure it would fit the festive spirit of any occasion! 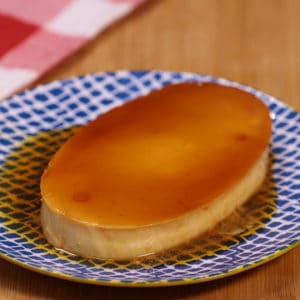