Filipinos would probably think about how this dessert is very foreign to them. Even as people called it a truffle already makes it sound very unfamiliar for Pinoys. So first, let me tell you how it got its name.

There is nothing complex about this dessert. All that the person needs to do is simply roll the chocolate ganache into round shapes.

Truffles are originally edible fungi (or mushrooms) that are shaped the same way as the choco treat. Pastry and dessert chefs make them into the small, bite-sized balls that we can easily pop in the mouth. Once you bite the inside part, it is very soft and chewy. Finally, after rolling them into cocoa powder, they are already done!

The French discovered this delectable confectionery. In the year 1895, a French patissier had the idea of shaping the chocolate ganache that he made into balls. After that, he dipped them into melted choco and finally rolled them in cocoa powder.

As the dessert became a worldwide hit, the Filipinos were never late to the party. Loads of gourmet chocolate shops started opening one by one, lots of them selling this specific sweet. The phenomenon also gave way to several recipes uploaded on the internet for those who want to make their own homemade versions.

For this treat, it is best to use the healthiest ingredients such as dark choco. Not only will we benefit from all the nutrients and antioxidants that it will provide us, but it is also less sweet than usual. That means we can enjoy more of the delicacy without worrying too much about our health.

But if you prefer the normal milk choco that we eat, that is acceptable too. It may be less healthy than the previously mentioned kind, but it is also nutritious in its own way.

Who would’ve thought that Filipinos are amazing in making foreign recipes too? This condensed milk chocolate truffles recipe is a must-try! You can make them and eat them as desserts or you can give them as gifts for your friends. 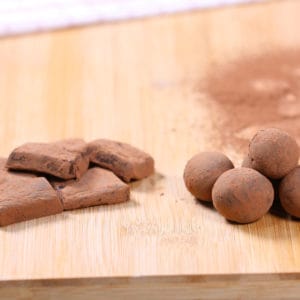