Chicken Tocino is the healthier variation of the traditional Filipino food called tocino.

Why is it healthier? Because it is made from white meat instead of the usual pork. Although when the two variations are compared based on their taste, there are no noticeable differences between them. If your children keep asking for the food for their packed lunch, how about making one that is made from chicken?

Originally, the name of the dish refers to the Spanish version of bacon made from pork belly. But for its Philippine version, there is a huge difference when compared to the said Spanish bacon. So, how was tocino discovered in the Philippines? It may sound like a great mystery to some, but this story is already known by many Filipinos since it has been very famous for years and even until today.

How to Make Chicken Tocino

Heat a pan over medium heat and put the marinated chicken including juice. Let it cook until the liquid evaporate and the chicken is tender. Add some cooking oil and pan-fry for about 3-5 minutes.

Are you familiar with Pampanga’s Best? They are one of the top manufacturers and distributors of Filipino food like tocino and longganisa in the country. It all started from Pampanga, where a woman with unsold meat decided to save the excess by adding flavorings and seasonings to avoid putting it to waste and to make it last longer. The result was unexpectedly good, and they thought it would be a total hit. They were right, the sales of the new products went really well and because of this, they were able to build their own company too.

If you use chicken instead of pork for the recipe, the finished product will surely be healthier! Imagine the amount of protein and other nutrients. Nevertheless, the kids will love the taste too. Cook it for them as a breakfast meal together with fried rice, fried egg, and some sliced tomatoes - yum! Or it can be cooked for their packed lunch, so they can enjoy both its sweet taste and health benefits even while they are in school. 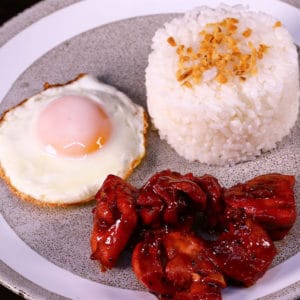