Bopis has a similar look as that of giniling, they are both made from minced pieces of meat and other ingredients. But their difference? You may be surprised at what it is actually made of, especially if you are not familiar with the Filipino recipe.

Are you prepared to know what makes this traditional food? Lungs - either from pork or beef, and other offal such as the heart. Even as a Filipino myself, I sometimes find the recipe a little intimidating, but once I was able to taste it I immediately let go of my prejudice. It actually tastes good and surprisingly many Filipinos loved it more than they expected.

Pinoys love eating at carinderias. It has been a tradition for many of us, and at the same time, it is helpful for families who prefer buying ready-to-eat food. Anywhere in the Philippines, you’ll be able to see carinderias lined up as they sell freshly cooked variety of dishes. Many of them sell almost similar sets of food choices, and usually, lots of these food stalls are also selling bopis. It is very flavorful and spicy, and its appearance makes it distinguishable from the rest of the food being sold.

Like most Filipino dishes, it is said to be discovered in the Philippines with the help of Spanish influence. Unfortunately, no one was able to know the complete history of the recipe, even how it was given its name has remained a mystery in the country.

How to cook Bopis?

Start by boiling the pig or cow's heart, lungs and liver with lot's of aromatics. I used ginger, lemongrass, peppercorn, dried bay leaves and vinegar. I boiled it for 30-45 minutes or until tender.

Once cooked, I finely chop the pork lungs as if it is minced.

Then, I start sautéing the onion and garlic until the onion is soft. I put back the minced pork lungs and pour the vinegar. At this point, do not stir and let it simmer for 5 minutes. Add the annatto liquid and cook until the liquid is almost absorbed.

Add the carrots, red and green bell peppers. Stir and continue to cook until the vegetables are soft. Add red chili then season with salt and pepper.

The pork innards used in the recipe boasts an impressive nutrient profile. If you want to supply your body with more protein, it is a great choice to eat food with edible organs like the heart and liver. Several vitamins - like B vitamins - and minerals are also present in the ingredient.

Bopis tastes really great when paired with a cup of rice, or it can also be eaten as it is. It is also often served as a pulutan for Filipinos who love drinking their alcohol, and according to them the spiciness of the dish perfectly fits the taste of beer. 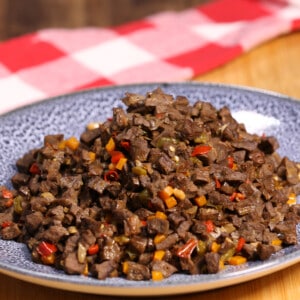