You are here: Home / Rice Cake / Biko with Langka

Biko with Langka sounds amazing, right? Who could imagine that the already delicious biko can be more enjoyable by adding in some fruits to the mixture? And it’s not just any other fruit, but a tropical fruit that can only be found in select tropical countries - the jackfruit or langka.

Filipinos find the use of jackfruit in their desserts very useful as they do it frequently. It adds a distinct taste to the recipe, and it makes different delicacies a lot tastier. Because of this, Pinoys paired it with biko to achieve the perfect level of sweetness. But it is also ideal to add it to desserts that have other fruit inclusions like a banana for the turon. The result? A much more delectable treat.

Filipinos eat biko anytime and anywhere. Vendors sell them almost all over the country. Pinoys then started considering it as their typical merienda for years. But even after those years, no one seemed to question which province in the Philippines started its discovery.

It may be possible that the Tagalogs conceptualized this delicacy. Due to its abundance in the Luzon area. But at the same time, Visayans make this sweet too. So it is hard to point out which of them started it.

People often think that eating too much rice is bad for health. It is true though, but it is not the same for all kinds of rice.

The main ingredient used in rice cakes like biko is completely different from normal white rice. Brown rice - which is used for this delicacy -  is undeniably healthier and it contains more fiber. Once you add in the pieces of langka, you'll get a healthy snack filled with nutrients.

After a long day at work, take a break by snacking on something yummy like biko with langka. Its perfect sweetness and chewiness will surely give you more energy to finish your tasks for the day. Enjoy it with a hot cup of tea to have a more relaxing break time. 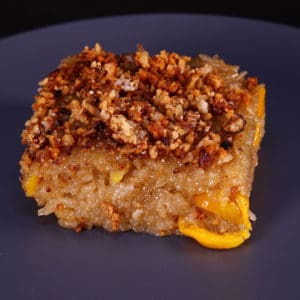