Bicol Express Pasta Recipe is a new way to enjoy the tasty and spice Pinoy favorite called Bicol express. The meal is normally paired with a serving of hot, steaming rice; but this time the minds of Filipinos are back at it again with the twists and innovations when it comes to cooking food. Sisig, another traditional Pinoy food, is also commonly made into a pasta dish. But a spicy pasta? It may seem new for some people, yet it actually exists. You may even stumble upon restaurants who may be serving them too.

The spicy and chili-filled dish originated from the Bicol province on the island of Luzon, which was originally referred to as sinilihan which describes how the amount of chili makes it what it is. Although its history started from the province, there are some records saying that it was somewhere in Manila - the capital city of the Philippines - where the popularity of the dish started blossoming.

Until now, the Bicolano original is still loved by many Filipinos, this then gave them the idea of making more ways to enjoy it. There are no specific claims as to who started with the recipe, but it has been circling around the internet from as early as the year 2015. Since then, the meal evolved and evolved until it started to have more than one variant. As an example, someone made use of tinapa or smoked fish for the recipe instead of the usual pork meat.

The dish may not be a friend of people with high blood pressure, as it contains quite an amount of cholesterol. But it is also a great source of potassium, protein, and several vitamins and minerals. When I say several, they literally are around more than ten.

Pasta can be eaten at any time of the day, so the Bicol Express Pasta Recipe sounds great for breakfast, lunch, snack, or dinner. The Bicolano dish has always had a distinctive scent which includes the chili and coconut milk ingredients used. The dish is very creamy and of course, spicy. It is often seen to be of the color white, but there are times when it appears light brown, or sometimes a few shades darker. Either way, it is a unique means to wallow in this Filipino favorite. 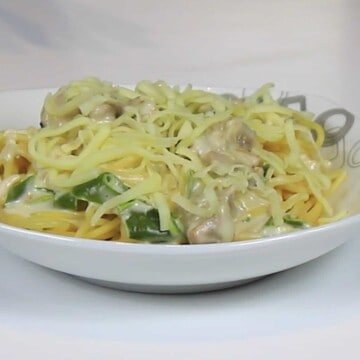