Adobong Manok perfectly describes what Filipino food tastes like. When Filipinos are asked what their national food is, most of them will answer adobo.

Even for foreigners, they say that the dish reminds them a lot of the Philippines. Then began the continuous and unfailing reputation of the recipe as the most well-known Pinoy food.

There are many reasons why Pinoys cook the dish more often than others. First, it only requires basic cooking skills and knowledge. Second, the ingredients can be easily found and bought in the market, plus you will only need a few of them. Third, it takes a few minutes to cook serving. Lastly, the cooked adobo can last for a few more days compared to other foods. Isn’t that amazing?

Filipinos already acknowledged and familiarized themselves with the famous history of the recipe. As the Spaniards came to the Philippines in the early days, they delved into the country’s culture and cuisine too.

The early Pinoys marinates the animal meat in vinegar, to give them a longer shelf life. The Spaniards decided to name the then-existing cooking method as adobar, the Spanish term for marinade. After that, the name evolved into what it is today.

Do you think the dish will be perfect as the next baon for your kids? Yes, it is.

Sometimes, people overlook the health benefits of adobo. It may be due to its already long existence, that they tend to focus on its taste instead. But in reality, it is as healthy as it is tasty.

Chicken is very rich in protein and other nutrients, and even small ingredients like the bay leaf also contribute to its overall benefits.

The best thing about Adobong Manok? It’s very easy to cook that you can serve it even during the weekdays! You do not have to worry about being busy at work and having no time for preparation since it will only take you a few minutes to finish it. 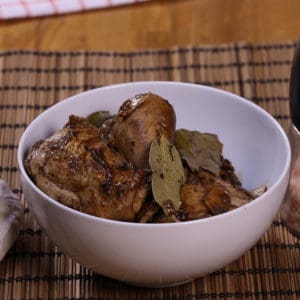