Adobong Balut Recipe will help brighten up the typical Pinoy balut and transform it into a dish that is still very Filipino. Most foreigners that are first-time visitors of the Philippines challenge themselves in eating a unique delicacy called balut. It is not your usual egg, it is even considered as one of the weirdest foods in the world. Instead of seeing a normal yolk and egg white, this Pinoy good consists of different components including the almost impossible-to-eat duck embryo.

Believe it or not, even though it is originally from the Philippines, eating the fertilized duck embryo is still not fully embraced by all Filipinos. You really need to have a strong stomach to be able to manage eating it, but the good part is that it is actually safe to eat and delicious.

Adobo and balut are two original foods that Filipinos are proud of. How they were combined that resulted in adobong balut is still not known, but one thing is for sure - it definitely was a big hit among Pinoys! The ingredients are all readily available, so anyone can cook this exciting and bizarre dish. Maybe those who can’t stomach eating the duck embryo can finally be able to eat it if it’s made into another meal.

Although delicious and tastes unique, people should limit their intake of the duck egg delicacy. It contains high amounts of cholesterol, which makes it off-limits for people who are prone to high blood pressure. However, if eaten and moderation, you can reap the health benefits of the dish. The Pinoy egg delicacy is known to provide impressive amounts of iron and calcium.

The Adobong Balut Recipe can be done during lunch or dinner, or any other time of the day as long as it is eaten together with rice. It has a similar appearance to the typical adobo which is dark brown in color because of the soy sauce. 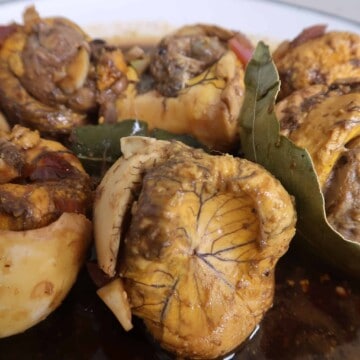